Time to prepare for Surgery #3.  Early September is the target.  You may be asking yourself, "Why is it time to prepare if it's 7 months away?"  My answer, it's all mental prep.  I can't do it at all at once.  I'm slowly easing into this one.  And yes, it will take me 7 months.
For the majority of the time since Rosemary was born, it's been a challenge to not think about the big surgeries and procedures.  The ER visits and all of the hospital stays that came up out of the blue were enough to throw a permanent set of blinders on that allowed us not to think, see or worry about anything unless it was the "day of" or right in front of us.
We visited Rosie's Cardiologist today, she gave me the most uplifting report on Rosie's heart. Her function has improved tremendously, which has been significantly down since we left the hospital in September 2007.  After Rosie's Norwood, she went into severe heart failure and we had two back to back admissions that kept us at the hospital for a month and a half.  The good news is that she is growing cognitively, physically and emotionally.  To get a positive report after the year we've had was just wonderful.
The hard part is that we now have to face the realities of preparing for surgery again.  Which, in my opinion, never gets any easier.  After her second surgery, I was so used to being at the hospital that I actually felt safer during the surgery and, of course, after it was over.  I thought I was mentally stronger and more capable of not getting emotional over the thought of surgery #3, the Fontan.  I was wrong.
I almost began crying today when I heard the words from her Cardiologist, "We need to start thinking about her next surgery and I want to cath her sometime in June."
What?  In that very moment, my trauma blinders were lifted and the reality that we still have one surgery left was, all of the sudden, upon my head and heart again.  Of course I knew the Fontan was necessary.  I guess I just thought that after almost a year of not HAVING to be at the hospital or think about surgeries, that somehow we had escaped the realm of HLHS.  We've been on cruise control for so long, exactly one year to the date on Sunday.  Earlier this week, I was planning our one year post-Glenn party for Rosie, so the reality of hearing this news, which is still positive, just caught me off guard.
I have every reason to believe that she will recover from the Fontan just as well as she did from her first two open heart surgeries.  Just as her little body prepares to go through it again, we, too, must prepare our hearts and minds to be her strength and hope.
FYI: She was AWESOME today for every test she had to go through.  Bloodwork, EKG, SAT's, and an Echo.  Rosie, YOU ROCK SWEETIE!
Posted by Moma at 1:47 PM No comments:

Email ThisBlogThis!Share to TwitterShare to FacebookShare to Pinterest
Labels: Mental preparation for surgeries

Pissed for 10 Seconds: On Remembering the Difficult Days

Recently, I was reminded of the unique position of where I've been over the last 19 months. That's just what happens when you and your family have gone through one of these survival periods.

I havn't had too many days in the last few years where I've actually been upset enough to get pissed. But the other day I saw a picture of Rosemary when she was about 8 months old, and I got a rush of adrenaline in the pit of my stomach. In that instant, I became incredibly pissed. I felt like the necessary insanity of that time had robbed me of the normalcy that I had craved for the first year of her life. I just don't remember much detail surrounding those months, and I can't recall having too many moments of not having to worry about Rosemary's life. It was so constant that everything else just kind of flew by in my rear view mirror. I felt like I missed having my baby, I blinked and now she's 19 months old. I know that particular part of having kids is normal, they all grow up too fast. But this has been a whirlwind.

I was so wedged between keeping her alive and trying to predict if each incident of vomiting, fever, SATs dropping or crying was going to be the next straw that broke the camel's back sending us rushing to the ER again. I just kept blindly walking on the treadmill of life. I was so fearful for her life from day to day, I had a very difficult time trying to stop and enjoy it. Of course this challenge has given our family an indescribable amount of wisdom, patience and positive perspective, but it was the most difficult time I've ever lived through. I don't know how, but we're probably some of the happiest people on the planet.

New moms don't get any sleep to begin with. When you throw placing NG tubes, insuflons, feeder bags and all of the medical tubing, tape and monitors in there...you kind of forget who you were before all of this began. You instantly jump into the role of surviving. Rosie and I have always had a crazy and beautiful understanding that living sometimes means that Mommy has to reluctantly inflict some discomfort...only to survive. She's been so forgiving. I don't know anyone as forgiving as her. I still have to place a feeding tube into her G-tube (button) 3 times a day, but it's better than the memories of placing an NG tube up her nose. Even at those times, her little eyes would look up at me with that look of "...I know why, but damnit Mommy!" She would sigh when it was over and then put her head on my shoulder. I probably cried more than she did. She's the strongest little kid. It's been almost a year since her second open-heart surgery, it was Leap Year and it was a blessing.

Rosemary is doing awesome. And finally, so am I. I'm here, typing, and not crying over not getting any sleep or having to sleep in the ER again. We're not there. We're here, and I'm grateful. I was only pissed for about a total of 10 seconds that day...and then Rosie literally knocked on my door, I opened it and saw those big, beautiful brown eyes staring up at me, and she smiled.

That pissed feeling in my gut went away in an instant.

If I have any advice or sentiments for anyone going through this right now, know that the hard times will become memories. Just do what you need to do for today, it's hard, but you will find your peace.
Posted by Moma at 7:22 PM 1 comment:

HLHSkids.com - A Website For Parents & Families of Children With HLHS

Promote Your Page Too 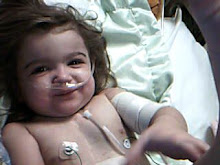 This little turkey is a living miracle. 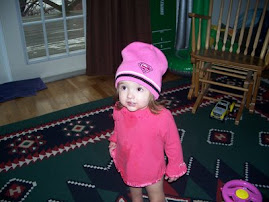 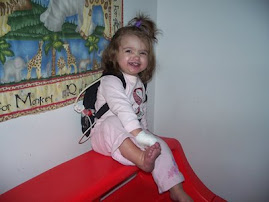 Moma
I love life, my family, music and frogs. I've always been a dreamer, a hopeless optimist, and somewhat of a nutbar. I grew up in a small town in Western PA so, yes, this lady is a Steelers Fan! I recently became an RN and am excited about beginning my life as a nurse. I'm currently working on my PhD in Sanity. I'm 41.

Smiles and laughter amidst the rain.